It is no secret that people in cities tend to walk faster than those from more rural places. Anyone who has gone downtown can attest to this. This observation was first put forward in a 1976 journal article, “The pace of life” by Bornstein and Bornstein, which statistically compared walking velocity of inhabitants of 15 cities and towns and concluded that “pace of life varies in a regular fashion with the size of the local population, regardless of cultural setting” (Bornstein and Bornstein, 1976). Since then, other papers have supported this, providing various reasons as to why. The Bornsteins cited Stanley Milgram’s “overload hypothesis”, suggesting that large amounts of sensory input, i.e. the hustle-and-bustle of cities, forces people to increase walking speed to reduce stimulus (Milgram, 1970). Others have suggested sociologic factors, such as the shift to more professional relationships rather than familial; as well as economic factors, stating as wages and cost of living increases with larger cities, so does the value of time (Walmsley and Lewis, 1989). The latter in particular has become the prevailing theory after being validated with data from 31 countries (Levine and Norenzayan, 1999).

There is, however, another theory giving a much simpler explanation – city pace is faster because the demographic walks faster, as shown in figure 1. Those living in cities tend to be younger, with a greater male percentage. Comparing a city’s expected pace, based on their age and sex structure, to the measured speed showed a greater correlation (r=0.579, p<0.05, two-tailed) than that found between city size and pace by Bornstein and Bornstein (r=0.346, p>0.1, two-tailed) (Wirtz and Ries, 1992). The same study also debunks Milgram’s sensory overload hypothesis simply by showing no correlation between population density to walking speed. Despite the seemingly conclusive results, however, this paper has been largely ignored, having been only cited 23 times according to Google Scholar, compared with Levine and Norenzayan’s 235. 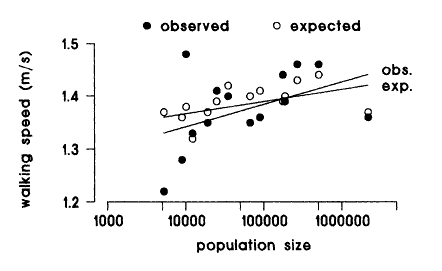 Figure 1: Comparison between expected walking speed based on demographic and measured speed of various cities. The discrepancy between the expected and observed results has a 97% chance of being only due to experimental error (Wirtz and Ries, 1992).

This brings up several points in the practice of science. First, there is a concept in philosophy that applies itself well – Occam’s razor states that among equally valid hypotheses, the one requiring the fewest assumptions is the most ideal (Baker, 2004). In other words, the sociologic and economic hypotheses rely on many external factors assumed to be true and not directly measurable, while the demographic explanation is self-sufficient.

Second, scientists should remain unbiased in the analysis of results, with experiments being used to discover new ideas rather than try to blindly prove one’s own convictions. Einstein himself was guilty of this, spending much of his life trying to rebuke the uncertainty principle and quantum mechanics, believing that “God does not play dice” (Hawking, 1999). Even if the conclusions may not be as interesting, or the results seemingly completely invalid, they must be heard.